So here we are, the first real episode of season 5 and oddly, it starts out like season 4: centering around a castle!

This time we’re not re-enacting a Scooby Doo Skit though, this time we’re dealing with a rather relocatable issue that our lead, Twilight has. Namely she’s having issue adjusting to her new castle, it just doesn’t feel homey to her compared to the tree-brary (Which we blew up at the end of last season to show that Tirek was a really big threat as well as instill a sense that change is coming)

So after the other 5 realize Twilight’s issue, they send a recently awoken Spike (Who we find out sleeps with a Rarity Doll..leading us to another question that if Rarity is the only one who really sews, who made that for him? ) with her to the Spa! (Which doesn’t have a name it seems)

The girls then get to work making the place feel homey and inviting, which naturally means we need to break into song! Which we do, though Rainbow Dash leads us in this time, refreshing change. Overall the song isn’t horrifically long, in poor juvenile taste, or painful to watch as the style and construction has honestly come a long way compared to previous seasons.

Sadly we see that once again, without Twilight’s leadership aura that apparently is only effective if she’s within 40 meters, the girls end up decorating the castle in their own style, completely missing the point of what they intended to do, which was to make it more inviting to Twilight. We can forgive this as we haven’t even gotten to a real second act and we can feel the pacing, at least I could. Incidentally I wonder if I could get a real life version of that Wonderbolt statue we see in Rainbow Dash’s rarely seen house interior?

So the song ends with a wide shot of the Map of Equestria that looks suspiciously like a Skyrim Mod that needs to be made (Or for that matter already has been, I seem to recall riding a giant Derpy in Skyrim at one point so who knows WHAT’S been made already?) and the reality of their futile effort sets in. Rarity’s Bridzilla trait kicks in and everything falls apart without Twilight’s paragraph long monologues.

It should be worth noting that in order to buy some more time for another revision, Rarity AGAIN takes advantage of Spike. I’m beginning not to like her at all, what is that like 5 major times she’s knowing strung him along? There’s a lesson for the kids watching. :/ Hopefully we’ll get an episode where it comes full circle and is properly addressed. 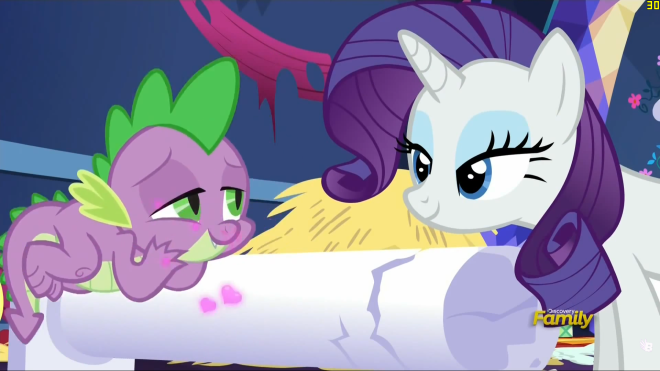 Meanwhile on the B side of the episode, we see Twilight and Spike at the Spa. Here’s another thing that stuck out in my head was that for a world that’s moving at the same speed as Equestria Girls World, their technology is radically skewed. We see a dryer for her hair that no doubt requires Post-Industrial technology, yet they still haven’t harnessed the power of the internal combustion engine. This re-enforces my theory on technology purposefully being held back by higher ups.

But I digress. 😀 The highlight of the B side is the Spa ponies get a set of longer lines! Still can’t place their accents but I’m sure someone else will. I like when the backgrounders talk, I’d enjoy it if they got David Tennant to voice Dr. Whooves but I doubt that’ll happen anytime soon. Offhandedly, I don’t seem to remember the Tree-brary having a name, I mean the Spa is called the Spa, when did we call the Tree-brary “Golden Oak Library”? Oh well. At least we can sell it with a proper name now. 🙂

As the act finally comes to a close, the girls back at the castle realize that they need to think outside the box, and end up making quite a beautiful Chandelier of Memories (maybe we’ll call it that?) highlighting moments we all remember, using the roots of the tree-brary to keep a reminder of her last home in front of Twilight. Now we can let Twilight settle in, and set up the ability to do a “Clip Show” using the memories, so everything’s fine. Interestingly, there must be a France-like providence, as Dashie uses “touche” and we’ve already seen Applebloom end up shouting in French. Wonder when we get to go there? 🙂

Overall I enjoyed this episode, I’d give it a 5 out of 10, average, but not horrible. I’ll just leave you all to comment and hopefully stir up CONSTRUCTIVE debate or words of anytype!

This site uses Akismet to reduce spam. Learn how your comment data is processed.